13.03.2018
The Hayleys released Brazil-inspired video "I like Brazil". The band pays their respects to old-school Brazilian bands and its metal scene in their own very special way.
Mix your caipirinha- it's time for samba and sunburn with The Hayleys!
https://www.youtube.com/watch?v=CNdVsm5kvrw

We have succesfully finished our new album recordings.

Album will be released in Spring 2018 and band hit the road. More about gigs and album later...

We would like to thank Kuha for the years of hard work and great time together.

Jimmy will play his first show with the band in Tampere on 21th of July 2017.

We will release music video of the song called "Sekaannuit Vasikkaan, Senkin Pervo" in early Summer. You will love it!

Upcoming album recordings will take a place later in this year. We have lots of new kick-ass stuff. Can't wait to enter the studio!

Poppari show in March is cancelled.

New date for the show is 6th of June! Stay on tune!

The Hayleys has released lots of new music on Youtube: https://www.youtube.com/user/hayleysroyalwhores

The Hayleys will play handfull of shows in Spring. Check out shows-section! We are working also with our new album. Album will be recorded in the end of summer.

Xmas With The Hayleys Vol.2

07.10.2016
Christmas is coming early this year. The Hayleys will enter the studio at the end of October. The band will record the follow up to the previous year's controversial sensation EP "Xmas with The Hayleys". Songs will be released one by one for free throughout December.
This year's Santa is not gonna be sober.

The Hayleys 7" split vinyl out 27th of August

Endless fields, buildings after buildings, junkies and rednecks, anxiety and despair. The Hayleys, a punk/metal band from Jyväskylä, and Sydäntalvi - atmospherical rock/metal band from Laitila pay respects to their roots by releasing a special 7” split vinyl. Jyväskylä/Laitila throws you into an inferno between two cities, where each song depicts its birthplace perfectly.

New album “Rotan Pesä” (Rat’s Hole) will be released 31th of March 2016. Tracklist, artwork and preorder info will be released soon. Baby, You’ll love it! Also, website update is coming up! And last but not least, our Monster Delirium European Tour will take a place in May! Here’s some tips for the Tour: Stumbras, Balzams, Wuborowa, Bozkov, Currywurst. The Tour dates will be announced soon! More info and other shit from our Facebook site: https://www.facebook.com/The-Hayleys-293915053991940/

Santa's little helpers have been busy recording these lovely christmas songs. Check them out:

Merry Christmas you all little fuckers!

We will release “Christmas with The Hayleys Vol.1” song collection in December. These songs fuck Michael Buble deep inside his ass. Baby, you will love it! Don’t forget, we will release full length album in Spring 2015 and play handful of shows in Finland + Europe.

New songs ready to be recorded

We have written a handful of new kick ass songs for an upcoming album. It is time to enter the studio later this year.

There will be some big changes in the fourth album. Namely, the album lyrics will be 100% in Finnish language. We could make the album in the same way and style as the previous three, however we decided to challenge ourselves and our listeners. We are sure many of you are going to be happily surprised.

Another thing is that Hayley’s Royal Whores will be known in the future as The Hayleys. There are multiple reasons for this change. But, in short: Now it is the right moment to do it.

We will keep you informed about the studio and future shows!
All the best for you guys,

PS. Friends and fans abroad, no worries! We will be touring outside of Finland in the future as well.

Check out our new music video or Shut The Fuck Up

Get your copy of Kill the Monkey

Get your copy of Kill the Monkey from Levykauppa X!

Pasi's interview on radio (in Finnish)

New album will be out on 9th of August! Check new band pictures from media-page.

Finnish rock-metal bastards Hayley’s Royal Whores have released the official video for the song Kill The Monkey. The song is from their upcoming album Kill The Monkey. The video was shot in Jyvaskyla, Finland, during the four seasons of 2013-2014 and directed by Anssi Korhonen.

Also our new album will be available soon. 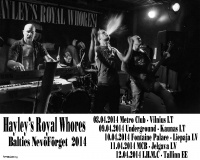 3rd album recording will take a place in Spring 2014

And good news for the Baltics. The band is touring in Lithuania, Latvia and Estonia in April. More info coming soon.

Hayley's Royal Whores has decided to part the ways with Mike Terror. The band wish him the best of luck in his future endeavors.

What a fucking great time on the road with Manzana and Riot Club!

What a fucking great time on the road with Manzana and Riot Club! Thank you all! It was kick ass time across Europe. See you soon, we are coming back!

Metal from Finland interview with Pasi and Alex

Behold, we have a competition for you!!
To win some cool stuff, all you need is to do a few simple steps:

For every city we will randomly draw one winner.

The winner and his/her friend will get to see the chosen show for free AND will receive a free CD from the performing bands of his/her own choice. With signatures, of course!

The competition will close down on Saturday 20.4. and winners will be picked and contacted after this day.

Hayley's Royal Whores, Manzana and Riot Club will join forces and hit the road for European Tour. The bands rock the stage in 11 countries across Europe during April-May. Don’t miss your chance to see true Finnish rock/metal madness live!

2nd album Back To The Zone is out now!

Ladies and gentleman! 2nd album Back To The Zone is out now!

Check out the first single track "Are You Ready?" on Youtube.

PRE ORDER BACK TO THE ZONE ALBUM + T-SHIRT FOR SPECIAL PRICE!

During the last year we have received a lot of questions about gigs and new album. Basically these inquiries were concerning the band called For Selena and Sin. Reason for silence was that For Selena and Sin stopped existing in February of 2011. There were multiple reasons for the band to be buried.

Even though the road came to an end after seven years of work, something was already happening in Jyväskylä. New line-up was formed by founding members of For Selena and Sin. This group started to work on debut album in the summer of 2011. Now, half a year later, album entitled 'Discoteque Tranny' is ready to be released. The date will be announced soon.

After album is released, band will start touring all over Finland. First shows will be in spring. Check out the event calendar to see the dates and venues. In addition to this, band is looking forward to hit the road in order to play gigs abroad. Also band has already started writing the material for the next album.

The Hayleys is Finnish rock/metal/punk crew from Jyväskylä. Inspired by drugs, pornography, and Satan, the band was formed in 2011 by singer-guitarist Pasi Crash, keyboard player Teme Scnapps, and drummer Kuha Spears. The Hayleys went through a succession of bass players before Alex North joined the band in 2013. The band has released three English language albums known as Hayley’s Royal Whores, before their Finnish debut in 2015. Active touring across Europe created The Hayleys's dangerous and scandalous live act.

prev
next
x
7" split with Sydäntalvi